NOAA has initiated storm surge advisories for Hurricane Irma as it moves closer to the US mainland.

Advisory #34 issued at 11:00am today contained a storm surge watch for “the Florida peninsula from Jupiter Inlet southward and around the peninsula to Bonita Beach, including the Florida Keys.”

Subscribers may click the image to apply the storm surge flood potential footprint directly to their exposure sets in EigenPrism. 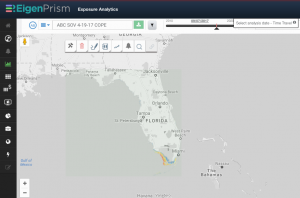 The combination of wind, flood and storm surge data available in our real-time event catalog will help you obtain the most complete assessment of how your program or portfolio may be impacted.

EigenAlert subscribers will continue to receive automated notifications with key metrics as these events progress.

Assessing the risk – why it matters

It is estimated that over 2 million homes in Florida are at risk from flooding. Along the coast, storm surge is often the greatest threat to life and property from a hurricane. In the past, large death tolls have resulted from the rise of the ocean associated with many of the major hurricanes that have made landfall. Hurricane Katrina (2005) is a prime example of the damage and devastation that can be caused by surge. At least 1500 persons lost their lives during Katrina and many of those deaths occurred directly, or indirectly, as a result of storm surge.

The National Hurricane Center offers national hazard maps on its website. The view of storm surge flooding vulnerability helps people living in hurricane-prone coastal areas along the U.S. East and Gulf Coasts and Puerto Rico to evaluate their risk to the storm surge hazard.

Southern Florida is particularly at risk from storm surge flooding. This article explains the reasons why the region is vulnerable: